A reasonably common museum problem. Several hundred museum objects to be photographed, one set of old museum numbers, one set of new ones, and then after generating a set of camera numbers, we were to rename the camera files to some name relating to the new museum numbers.
How to make a concordance between the four sets of numbers - ordinarily I do this by hand as I photograph, but as soon as I renumbered the images, the original concordance we made on site became useless.
The solution required that we maintain a record of the original filename against the new renumbered file. I could have used paper, or even a spreadsheet, but that would have been quite time consuming and probably error prone.
I felt it could be done using IPTC data mixed in with my workflow, so here's how:
exiftool "-iptc:caption-abstract<filename" *.jpg
Incidentally, at this point everything suddenly started to organise itself, as disconnected photos taken all around the museum began to re-arrange themselves by their museum numbers.... 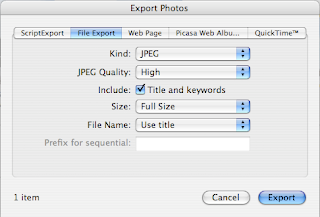